AIChE members pride themselves in their service to the community. During the 2016 – 2017 school year, 108 AIChE members volunteered 852 total hours of their time to help those around them.

One community service opportunity AIChE participates in every year is Habitat for Humanity. On August 20, 2016, twelve AIChE members helped with the Maroon Edition Habitat for Humanity. Much of the work was landscaping-related. Volunteers cleaned up the yard surrounding the property and prepared the grounds for rain. They also rebuilt a shed and built a small footbridge. 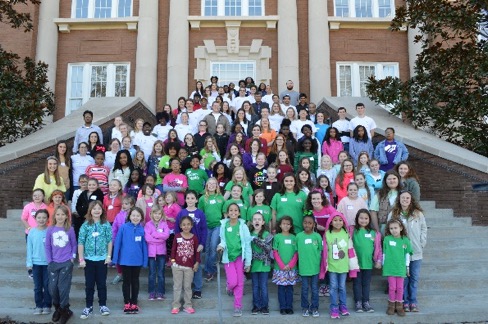 Another service opportunity the members of AIChE enjoyed was Girl Scouts Engineering Day. On January 28, 2017, seventy-eight Girl Scouts of all ages attended the Girl Scouts Engineering Day hosted by AIChE. Forty AIChE students along with Dr. Kundu and Dr. Rai volunteered to teach the girl scouts. Dr. Kundu taught about polymers while Dr. Rai gave a short lesson on basic chemistry (protons, neutrons, electrons, etc.). The Girl Scouts performed different experiments with the help of AIChE volunteers; the girls made bouncy balls using cornstarch and glue and built robots using the Lego NXT program and Lego kits. Other AIChE members performed a few demonstrations in the Unit Ops Lab for the Girl Scouts, including how fluids are affected by height and the effects of solar and wind power.AIChE members also got a chance to work with the Boy Scouts. On March 4, 2017, AIChE members held a Merit Badge Day for the Boy Scouts of America. Eight AIChE members assisted twenty-one Boy Scouts in earning both their Engineering and Robotics Badges.